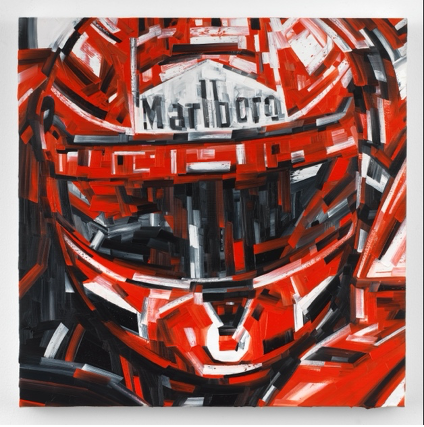 Focused on six F1 drivers Ayrton Senna, Alain Prost, Niki Lauda, Lewis Hamilton, Sebastian Vettel and Michael Schumacher painted in cropped tight compositions, It’s Never Over is Michael Kagan’s first solo exhibition with Over the Influence. The exhibition will be on view Tuesdays – Saturdays at Over the Influence, Hong Kong from 03 April – 08 May 2021.

Each work is painted as a static portrait of the drivers in tribute, reminiscent of compositions hung in Halls of Fame. Senna, Prost, and Lauda are some of the most iconic drivers of the sport across generations. Of that list, Prost is the only driver still alive – Senna died in an epic crash and Lauda passed away recently. Schumacher retired after a near fatal skiing accident in 2013. Hamilton and Vettel are the only drivers depicted who remain active today. When deciding how to select which drivers to paint, Kagan researched the best F1 drivers of all time ranked purely numerically, based on win statistics.

He selected drivers from the list of top 10 of all time. Kagan liked the idea that the ranking was not fixed in time; that no matter what era they are from, their statistics and thus they themselves, could still beat the new guys. In F1 there is a tradition of drivers paying tribute to other drivers of the past – for example Hamilton wore a yellow helmet in a race in remembrance of Senna. In his selection of drivers, Kagan honors the past and present of the sport and the ways in which the drivers from the past have inspired a new generation.

The portrait of Lauda is based on a personal photo his son gave to Kagan, showing how this cycle of remembrance also extends beyond racing, and into personal lives. These drivers remember who came before them and that’s what moves them forward. They are remembered through the images they’ve left behind, and the cycle continues.

Known for his dramatic paintings of man pushing the limits of nature through technology and physical stamina, Kagan explores the physical and emotional journey that accompanies explorers from mountaineers to astronauts. Never removing paint once laid down, Kagan instinctively works with an impulsive hand toeing the line between control and chaos.

0 comments on “Wander and Travel to ….” Over the Influence” Presents Michael Kagan First Solo Exhibition with the Gallery “It’s Never Over” | 03 April – 08 May 2021*Hong Kong”